Fried chicken is a dish that is hard to resist, but if your instinct is just to head down to your local fast-food outlet you’re missing out.

There are many different fried chicken recipes from around the world that offer incredible flavor's. Here are some of the tastiest fried chicken dishes that you should try.

With its roots in Africa, this version of fried chicken is very different to the standard recipes you might have tried. Its pan-fried rather than deep-fried so it’s simple to cook at home and is wonderful served with pickled pepper collards.

The chicken is marinaded in coconut milk, garlic and buttermilk before being coated with shredded coconut and panko crumbs, plus salt and pepper. Refrigerate to set the coating before pan frying for tasty fried chicken.

Yakitori chicken hails from Japan, and technically it’s not fried chicken but grilled. However, served on a skewer and often bought as street food, yakitori chicken is so delicious that it’s viewed as a genuine alternative to its fried counterpart!

The Yakitori coating is made with soy sauce, sugar and sake which is simmered until it’s thick and sticky. The chicken is cooked and caramelized before being thoroughly coated with the delicious sauce. Finger lickin’ good!

If you like your fried chicken with a bit of a tang, honey mustard fried chicken is the way to go. It’s the same type of fried chicken you’ll have tried before but with a much tastier coating.

The chicken is marinaded with yoghurt, milk, chili, salt and pepper and left overnight before being roasted. A further coating of yoghurt, milk, flour, onion powder, garlic and chili salt is added before the chicken is fried. Once cooked through, honey mustard is drizzled over the top, or it can be served separately, depending on personal preference.

Many fried chicken recipes call for a batter or breadcrumb coating but there are alternatives that don’t sacrifice flavor, such as this Master Stock Fried Chicken dish. There’s no final spice rub or batter, but you’ll get incredibly crisp and tasty skin nonetheless.

The secret to this recipe is a thick, sticky umami broth in which the chicken is simmered. The chicken is then left to sit for a while in the cooling broth before being sectioned and fried. The skin retains the incredible flavors while being crisp to the touch.

Ingredients for the broth include shiitake mushrooms, soy sauce, garlic, ginger, sugar and salt, plus maltose and vinegar to glaze.

Fried chicken may be most strongly associated with the US but there are recipes all around the globe. This Kurdish fried chicken dish is served in a broth, providing the best of both worlds.

A lemon and salt marinade is first applied to the chicken before it’s fried until golden. The leftover marinade is then added to a pot along with water and onions to create a broth. The chicken is simmered in the broth before being coated in cumin and turmeric, and then simmered again.

Serve the chicken in its broth with rice, flatbreads and sprinkled with coriander for a herby flavor that’s unforgettable.

For a delicious, refreshing twist on the classic flavor of fried chicken, try this lemon-based recipe.

Combine water, honey, salt, peppercorns, rosemary, parsley, thyme, bay leaves and lemon to create a brine which the chicken should be marinated in overnight. Once drained and patted dry, a coating of buttermilk, flour, garlic, cayenne and onion powder is added to the chicken before it’s fried in the pan until crunchy and golden.

Create a paste from coriander, chilies, lime juice, garlic, cayenne powder, ginger, salt, turmeric and cumin and thoroughly coat the chicken. Marinate in the fridge for a minimum of 30 minutes to allow the flavors to penetrate into the meat.

Dip your chicken pieces in flour before covering them with beaten eggs. This creates a coating which is crispy and light. The final step is to deep-fry your chicken until they are golden - and then enjoy!

This fried chicken recipe has everything: a crunchy exterior, heat, sweetness, spice and a tang of salt. The perfect balance of flavors, the chicken is wonderfully crunchy even after its cooled, thanks to the addition of potato starch.

Coat the chicken with potato starch, going over it twice to make sure it is thoroughly covered. Wait for 15 minutes for the starch to start to sink in before frying the chicken until lightly golden.

Once cooked, the Korean glaze is added; this adds the essential flavors. The glaze is made from brown sugar, garlic, soy sauce, jalapeños and oil which is heated in a pan until it is bubbling. Toss the chicken in the glaze until it’s completely covered and then fry in the pan for a further minute. Enjoy hot or cold! 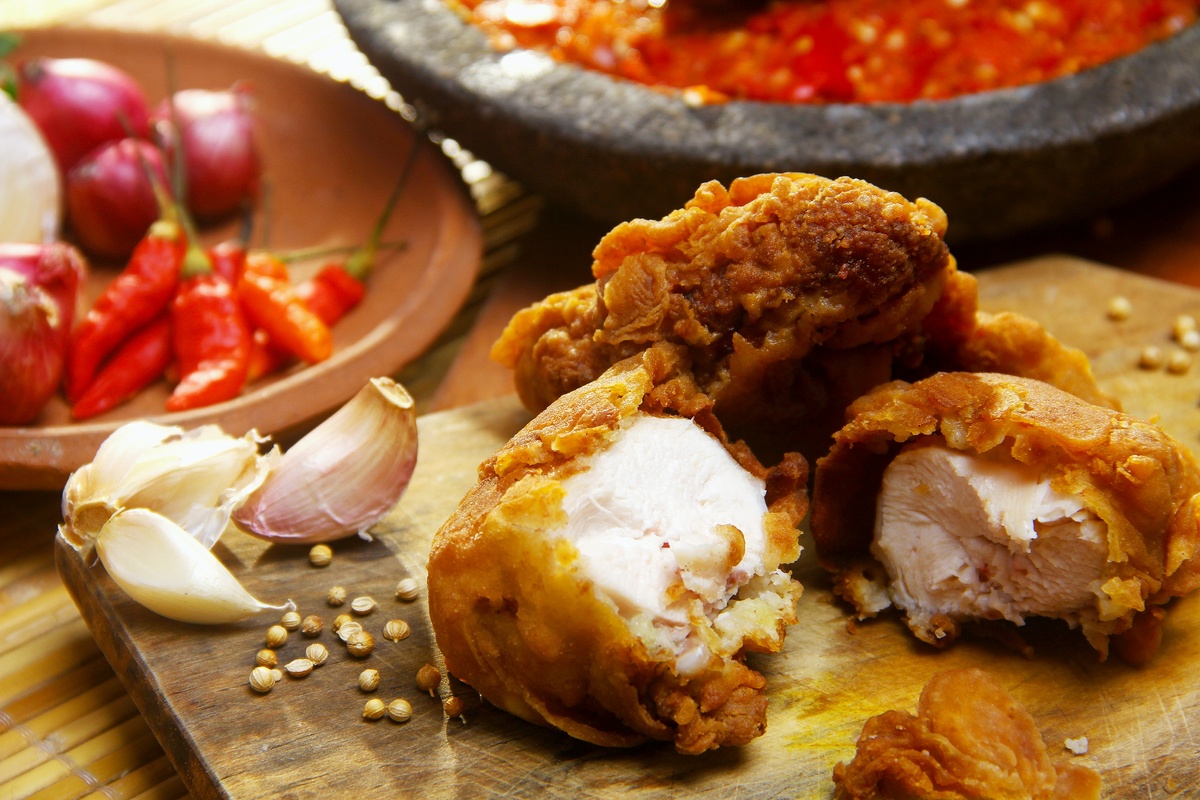